We’re getting closer to the end of mayoral debates and the city’s leading contenders Phil Goff and John Tamihere stepped out on Tuesday to a forum in Burswood. Times reporter Jim Birchall went along

A small, weather-beaten crowd gathered at East City Wesleyan Church in Burswood Drive on Tuesday to hear the opinions of incumbent Auckland Mayor Phil Goff and seasoned politician John Tamihere who is seeking a first term in office after this year’s Auckland mayoral election.

The two combatants were introduced as “two real… heavyweight politicians, who will win up to eighty per cent of the vote” by the evening’s moderator, Lloyd Wong.

Tamihere started by detailing his upbringing, which he described as working class, adding this has aided him in developing a “strong social conscience”. Goff stated being a born and bred Aucklander contributed to his extensive local knowledge and compassion of the demographic.

Goff delivered a polished, measured response when asked about what he has achieved for the city during his tenure. He described Auckland as “a fantastic city to live in”, but did concede transport woes do exist and are a result of infrastructure planning that badly misjudged the city’s population explosion. He championed the recently completed upgrades at Botany Town Centre, stated the Reeves Road Flyover (slated for completion 2021) as examples of successful projects out east, and highlighted the Supercity ‘s low rate increase when compared with similar urban areas.

Tamihere came out swinging and attacked Auckland council’s “fiscal blowouts”, labelling them the actions of an  “out of control council which is running a regulatory monopoly” and invited residents to “challenge central government, challenge downtown Auckland” (a term he coined ‘surrender mana’) in regards to the regional fuel tax, and on the back of figures that implied 93 per cent of taxes generated in Auckland are gobbled up by central government in Wellington. 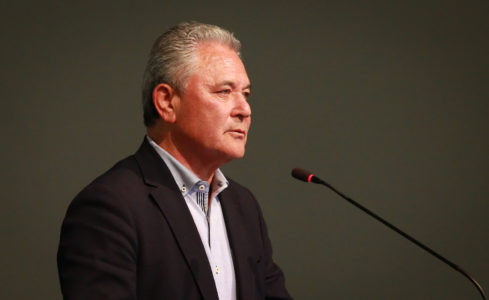 He then quipped that Goff returning from Wellington brandishing a fuel tax agreement with the government reminded him of (former UK Prime Minister) Neville Chamberlain, who famously arrived back in England waving about the Munich agreement ( a non-aggression pact) after a meeting with Hitler in 1938. This was Tamihere’s second such reference to Nazism in a week after a clumsy Sieg Heil comment was uttered in Ponsonby last Tuesday.

Tamihere extended the hyperbole when quizzed on his plan for a 10 lane, double tier harbour bridge which incorporated harbour-traversing rail options. This comment was met with derision by Goff, who insinuated the project is a pipe dream.

The challenger then aired his thoughts on the exclusion of right-wing Canadian’s Stefan Molyneux and Lauren Southern who were declined a chance to air their views at a cancelled event in 2018, declaring as mayor he would allow democracy and the principles of free speech to be upheld, even if he personally found the subject matter abhorrent.

Goff countered by saying he was all in favour of democracy, but cautioned he was only open to entertaining “free speech, not hate speech”.

On a cold, wet night, it was difficult to say if these two excited the 60-odd strong crowd. They didn’t excite me.