Developed by playwright Frank Vosper (who disappeared at sea in 1937 in an incident that would not be out of place in an Agatha Christie tale) from a story by the legendary suspense writer, Love from a Stranger tells the story of Cecily Harringdon (played by the magnetic Phillippa Hibbs), a young woman of new-found means courtesy of winning a sweepstake.

Set in 1930’s London, Cecily is yearning for adventure outside her job and the social restrictions that came with the time. Cecily meets and instantly falls in love with a charming American named Bruce Lovell (the suitably slimy Erik van De Wijdeven), who answers an ad for a room to rent in the Bayswater apartment Cecily shares with her aunt Loo-Loo (Catherine Maunsell) and friend Mavis Wilson (Rosheen Leslie).

Their courtship moves rapidly in spite of the fact Cecily is engaged to Nigel Lawrence (Matthew Cousins), who has returned to London after fulfilling colonial duties on a 3-year tour of Sudan.

The second act sees the couple move away from the capital, and after exchanging vows wind up in a West Sussex cottage destined for domestic bliss as the year’s pass. 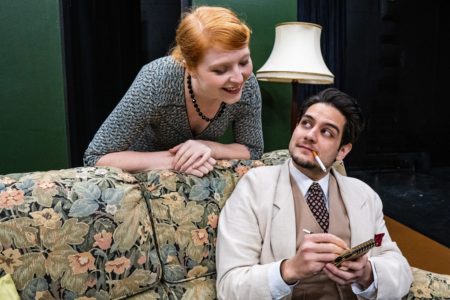 Dr Gribble (Andrew Maher) and gardener Hodgson (Barrie Graham) are introduced as characters in the country setting and prove perceptive as they soon discover chinks in Bruce’s charming veneer. The confident American’s slick guise also gradually becomes exposed to Cecily, and the audience is offered hints to his true manipulative intentions and sinister past.

After a slow, but enjoyable burn establishing the scene, the plot picks up pace in the second act, and lovers of the mystery genre will be indulged with a plot twist for the ages.

The responsibility of making a period-piece relevant to today’s audiences is done brilliantly by director Laurie Mills, a veteran of Noel Coward and Christie productions.

The cosy atmosphere of the theatre was the perfect antidote to the chill outside, and a glass of reasonably priced red from the well-stocked bar added to a great night out.

Agatha Christie’s  Love from a Stranger– Directed by Laurie Mills